Winz.io casino is one of the most reliable and trustworthy crypto casinos on the web. They are operating on the SoftSwiss platform and that’s one of the main reasons that they are accepting both crypto and fiat payments. We have to say that Winz.io has a pretty good user interface and great no-wagering bonuses.

You can get up to 150 Free Spins with no wagering requirements (x0) just for depositing 0.0026 BTC or 100 usd/eur. The winnings that you’ll acquire from the free spins are 100% real cash and yours to do whatever you want with them as you please. Also, at Winz.io, there are weekly Lucky Battles with 1,800 USDT up for grabs in each of these battles. The battles are slot tournaments, and real players from Winz Casino can participate in these tournaments. The winning criteria might be a turnover, biggest multiplier, or some other goal that will spice things up. 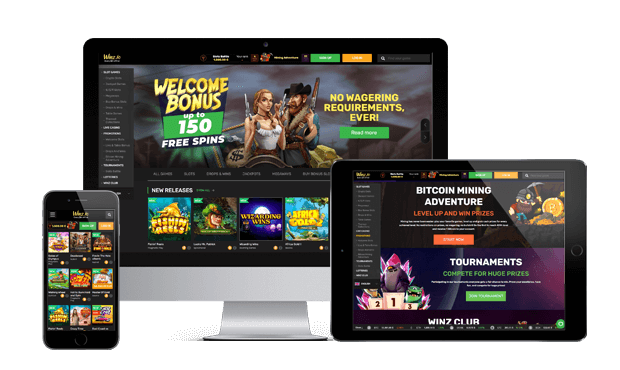 But that’s not all, there is a promotion called Treasure Island, where the competitors will have to go through the Winz.io world of different slot games with an amazing quest. It is called Treasure Island because there are 50,000 USDT in rewards, waiting for the first three players that are going to finish the quest. The first one gets an astonishing 25,000 USDT, so hurry up because the quest ends on the 25th of October!

One of the most loyal players at Winz.io, this month on 4th of August made a huge success by hitting one of the biggest wins in history. He was playing the slot Hawaiian Fruits by GameArt and he won a life-changing award of $105,472.50 just by placing a bet of $20. Hawaiian Fruits is one of the most rewarding games made by GameArt with an RTP of 96.08%. It is played on a 5×5 grid and instead of the paying lines that we are used to seeing in most slots, it is using the cluster payout. For example, you will need 5 matching symbols connected between them either horizontally or vertically for a win to be triggered. Then the winning symbols disappear and it will fill the Tiki Meter which is required to trigger a feature.

A Wild Symbol will be added to the grid every time when you will collect 6, 11, and 16 symbols. If you collect at least 40 symbols, you will also earn your ticket for the Free Spins round which will start at the end of the feature. But the fruity adventure doesn’t end up here. You can get up to 6 Wild Symbols if you are lucky enough to reach 55, 85, and 145 symbols in the Tiki Meter. When you enter the Free Spins round, the multipliers that you have reached are being transferred to the Free Spins round, where you will be playing on a 7×7 grid. That is just awesome!

The best about this feature is that with every new cluster win, the multiplier of all Wild Symbols on the grid will increase by 1. After a dozen successful cluster wins, you can reach a very big multiplier which is going to help you to get some huge wins, as Ozjan did.

He was playing the Hawaiian Fruits slot, and he managed to get the first three wilds and then 2 more, reaching a total of 5 Wilds on the grid. Some of them grew up to 80x multiplier which is crazy as it sounds. When there are two or more Wilds In a winning cluster, they are being multiplied between themselves, resulting in even bigger wins. At the end of the Free Spins, the lucky player Ozjan won a sum that we are sure he won’t forget for a lifetime, an unbelievable $105,472.50!

When Ozjan won this astonishing prize of $105k, first of all, he couldn’t believe his eyes. Then he wanted to withdraw his winnings and went to the banking section, where he selected his preferred payment method and made his withdrawal request. A few minutes later he was even more grateful to Winz.io casino when he saw that the money has reached his account and he can do whatever he likes with them. That’s one of the biggest reasons why we have a partnership with Winz, their super-fast withdrawal times, and great support team.

Feel free to create your own account at Winz and then choose from thousands of online slots, or even Live Casino table games if that’s your style. There is a great ongoing promotion at the moment for Live Casino players, where the guys from Winz.io will pay you up to 1% of your wagers on Live Casino games. That means that if you wager €10,000, you will get €100 bonus without any wager requirements regardless if you won or lost.

Let’s celebrate Ozjan’s victory once again and hope that you are going to be our next epic winner at Winz.io!